Who likes to bust balls? I certainly do. Every time I see a ball, it’s go time! Be it a soccer ball, a tennis ball or someone’s gonad, that ball is gonna get popped. And if I’m at a kid’s party and there are balloons… God help them. Luckily, videogame therapy came to my aid back in the early nineties in the form of the excellent arcade machine Super Pang.

Super Pang… doesn’t it just feel good to say that. Seriously, say “Super Pang” three times fast. Fun times, my friend. Uh… Anyway, Super Pang was a game all about (you got it) breaking balls. “How do you break balls?” I hear you ask. Whilst you’d usually accomplish it with excessive amounts of unnecessary swearing, here you rely on a trusty harpoon gun… Oh man! They should have called it Super Poon. Who wants to get some poon? Oh wait… So yeah, you can only shoot strait up with your ‘poon. When your poon connects with some balls (!) they break into smaller balls. When you shoot those balls, they become even smaller balls. Eventually they become so small that you can just pop them. When all balls are broken, it’s screen over and the next stage awaits. 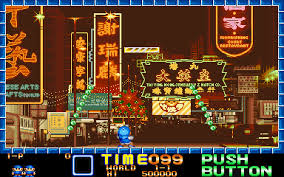 Disappointingly small balls awaited in this particular land… Or so I’ve been told.

Each stage represents a country by way of a fetching static backdrop and the overall campaign represents a world tour. There are power-ups to collect (including the legendary spreader), strange creatures to poon, time limits to beat and high scores to smash. It’s a good old-school smorgasbord of arcade delights. More over, the cute animated graphics lend the game a timeless look that ages well and retains it’s charm. And should you want to do some pooning in the comfort of your own living room, there is also a decent Super Nintendo port available, too.

Tower Bridge… Been there. Done that. It went down exactly like this screenshot, too.

The Super Nintendo version does include a significant number of sacrifices, though. The main one being the arcade’s two player co-op mode… NOOOOOOOOOOOOO! Let’s face it, on the sacrificial level that’s pretty fucking steep. That’s like if the devil told you “I’m going to give you a new car but in return I’m going to snik your balls and watch you bleed out.” This home console version also features less stages, which means you get less of those awesome backdrops. But the core game remains unaltered and it is still colorful, ball bustin’ fun, of which I played a shitload when I was still a young Chu. Still… If you ever find the fantastic Super Pang arcade machine in the back of a forgotten pub somewhere, be sure to pump some in it’s slot and get yourself some serious poonin’.