Beyond Two Souls is an exceptional videogame. From a narrative standpoint, it really truly delivers upon David Cage’s storytelling ambition. Past games like Heavy Rain have always had good intentions but have never been able to sustain coherence or quality throughout their playtimes. Beyond Two Souls, whilst definitely having the odd rocky moment (an occasional blip of stupidity here, a meaningless interlude there), finally manages to convince and hold interest. 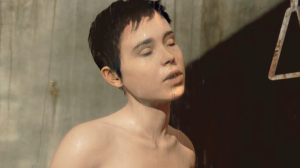 What is it with Cage and shower scenes? Perv alert!

This is partially due to the way in which the tension is ratcheted up spectacularly during the final third. Oh yes, the climaxes in Beyond Two Souls are of the truly unforgettable style. But even before you get to the total awesome-sauce of kicking some serious ethereal ass or crying your eyes out in the emotional roller-coaster ride of a finale, the game gives you definite indicators of how fucking great it will become. Whether it’s letting your frustrations out on a hapless S.W.A.T team, stealthing through covert C.I.A ops or terrifying yourself with trips through eerie, blood spattered laboratories, Beyond Two Souls’ early highlights come thick and fast.

Ah, Ryan… Hated him at first. Loved him by the end. Now that’s great storytelling!

It would, of course, be a gross disservice to not point out the excellent vocal performances of Ellen Paige and Willem Dafoe; they really sell their characters with expertise. But the supporting cast, most notably the unsung souls that portray Cole and Ryan also do a fantastic job. Their supporting characters are sold just right and their arcs lead to some really moving and spectacular moments. I got genuinely attached to them and every time they were in peril I was a nervous, emotional bag of bones.

God help us all! Somebody left the condenser open!! oh wait…

The graphical output of the game is generally impressive but not in a “these are the best graphics I’ve ever seen on PS3!” sort of way. It looks mostly great but there are certainly a few rough patches scattered about. There are undoubtedly a whole slew of PS3 games that look better (The Last of Us, for example). The art design is really terrific at times. There’s obviously a deep seated love of Sci-Fi at the root of the title and you can catch many visual cues from the likes of Alien, The Abyss, The Thing and many more. The game also has a really neat line in horror-house scares and atmospherics. That feeling of heading off into the inexplicable  unknown has been well crafted here; you feel isolated, vulnerable and without any understanding of what lurks around the next corner.

The montage scene was Brilliant! Just kidding. Oh my god it was SO shit.

Gameplay and control wise, It has to be said that Beyond Two Souls can be a bit hit-or-miss. Earlier sequences in the game (particularly the montage and stealth training sequence) can border on the awful… or plunge strait past it, depending on your tolerance of doddery mechanics. Likewise, the general way that Jodie controls like a tank in a confined space doesn’t help immersion much. Unexpectedly, however, later QTE fights prove to be excellent and exciting and the one section where you properly implement your stealth training is also surprisingly fun. Overall, I came away from Beyond Two Souls with my mouth agape, my eyes brimming with tears and my body eager for another playthrough. Well done Quantic Dream! Excellent stuff indeed.