So… Recently I wrote a blog about overrated games of this past generation. But in order to not be a total negative nelly (everything is shit / no reason to live… My family moto!), let’s redress the balance and look at the flipside of that coin (“What if you do got me boxed in?”). Here are five games that I feel are woefully underrated. Some of them were well reviewed but ultimately never got their dues and are now largely written out of gaming history, while others were just written off strait out of the gate. This much is certain, though; I had fun with each one of them!

Kicking off with a relatively well received offering, Sonic Generations garnered a smattering of applause upon release but then was promptly forgotten about. NOOOO! People should shout of this game from the rooftops and speak of it in reverent, hushed tones. Sonic Generations perfectly captures the spirit of the older Sonic games, but infuses that spirit with a refined sprinkling of successful elements taken from later periods. In my opinion, Sonic Generations is the very best Sonic game to date and probably my favorite platform game of all time. The reason for this is that the action stages are designed perfectly… No… That doesn’t quite cut it. Every stage is absolutely fucking exceptional! They all feel very different from each other and each has it’s own little unique hooks to dig into you. I’ve played all the stages in the game over and over and over. They never get old! The challenge gates, whilst seeming like tacky time fillers at first glance, actually turn out to be a great addition for those who want to get really deep into game. Usually, I’m not the guy who plays every nook and cranny of this type of game, but I just couldn’t help myself with Sonic Generations. Getting all the red coins, achieving S rank on all stages and bosses, beating all the challenge gates… I was well and truly addicted. Basically speaking; I have nothing but love for this game! And the stereoscopic 3D mode is beyond phenomenal. 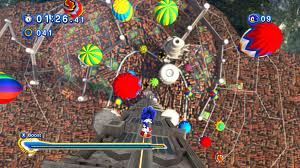 This in 3D is AWESOME!

Assassin’s Creed: Revelations always gets the short end of the stick. People often feel that this game was the point where the yearly cycle and over-familiar mechanics really corrupted the series. Two words; DEAD WRONG. Assassin’s Creed revelations is by far the best AC game available as of yet (ACIII isn’t fit to lick it’s boots). It refined the gameplay elements to near perfection, finally hitting the right notes in the main story missions by not pushing you down ultra-linear paths (unlike the previous games). Better still, the campaign was shorter than before, which negated over-repetition and brought more focus to the story. The story itself was much tighter, more coherent and better scripted than the prior games with far more impressive action sequences and set pieces. The only things that didn’t make the grade were the two new additions. The first person platforming levels were tedious to play and came off like a poor mans Portal whilst the tower defense mechanics seemed laughably simplistic. The great caveat to those was the fact that aside from the one tutorial mission where the tower defense was introduced, you didn’t have to play them ever again. They were very much off to the side and out of the way. That small bit of nonsense notwithstanding, Assassin’s Creed: Revelations was a brilliant game, crammed to the rafters with great gameplay and eye-popping graphics. 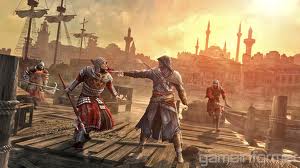 Poor game? I call that Istanbullshit!

Bulletstorm might well be unessential in the grand scheme of gaming, but man was it fun. It had great game-play, with the whole kill-with-skill thing not being nearly as intrusive as you might’ve thought. The game was well crafted and had great pacing. There were also some really impressive bosses, including a giant plant boss that seemed to have escaped directly out of a Metroid game (with old school weak-points! Yay!)! The foul-mouthed humor is bound to rub some people the wrong way, but I found it amusing enough. Yet… The game isn’t nearly as funny or as controversial as it thinks it is. In the end, when all it’s publicity grabbing distractions such as grotesque laughs or snicker inducing cusses have been dispensed with, Bulletstorm still stands tall because it’s core game-play is wired tighter than a virgin’s knickers… And nothing takes precedence over that.

This exact same thing happened to me when I went to the London Eye.

“They keep calling me!” Dead Souls once again proves that the Yakuza series is one of the best and most underrated franchise’s in gaming. Sure, the game suffers the same niggles as it’s predecessors; generally antiquated mechanics, occasional camera issues and text boxes galore… But it also has their strengths; unique lovable characters, a hilarious sense of humor and a grand, epic plot powered by amazing cut-scenes. Yakuza: Dead Souls is a ton of fun. Killing zombies just never got old and I was always interested to see what kind of huge, crazy monster the game was going to throw at me next. For long time fans, the plot and dialogue shine excellently too. There are so many unforgettable scenes (if you don’t get a belly laugh out of Daigo’s reaction to Maijima’s blow-job request, then you must a zombie yourself!). That said, if you love Yakuza for it’s more open-world elements such as massage parlors and the like, you should know that the game pushes them further into the background. Getting in a round of karaoke is a bit more bothersome when you have to fight through an entire army of zombies to do so! All in all, Yakuza: Dead Souls is a fantastic game that will make you fall in love with the franchise all over again. Or for the first time… IF YOU GAVE THE SERIES A CHANCE YOU BASTARDS!!! *ahem*

BLAM! Confringo, motherfucker! Expeliamas this, you cunt! Oh yeah, Harry Potter has come of age and is busting heads like the fuckin’ Terminator! Although it’s never going to win any awards for originality, Harry Potter & The Deathly Hallows part 2 was an engaging third person shooter that kept me entertained for it’s murder-happy duration. The difficulty and game length are both just about right, and there is also a good smattering of memorable set pieces along the way. I don’t know why people are so dismissive of this game. I found it to be a lot of fun (BOOM! Where’s your head, bitch?)… Even if you do have to spend ages magically unlocking small garden gates that you could easily kick off their hinges, or merely hop over. That bit of eye-rolling stupidity aside, this was a decent game.

Bonus round: GAME OF THRONES

This is in the bonus section because I’m currently playing it and have yet to finish. The reviews weren’t good but I’m a huge Game of Thrones fan (who isn’t?) so I couldn’t resist despite my better judgement. I’m really glad I gave in to that urge because I’m having a blast with the title. The graphics are passable but outdated and the RPG combat system is actually pretty awful. But the story is excellent. The dialogue trees and general flow of the story is very reminiscent and respectful of the TV show. The dull combat is negated somewhat by how easy it is. This is a stress-free game that I can happily stick on after a hard day of work and unwind in. I’ve even fallen asleep playing it once or twice… And that’s a good thing. So yeah, Game of Thrones seems to be yet another underrated game that I’m enjoying more than I should.

For relaxing nap time, Make it Game of Thrones time.

So there you go. Don’t throw yourself off the tower just yet, some games are actually quite good! And so, dear reader, I offer the floor to you. What games would make your underrated list? Sound off in the comments if you dare.