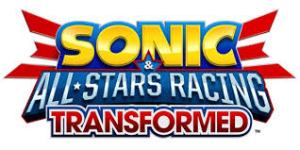 One of the most impressive games for me at E3 2013 was Mario Kart 8 on the WiiU. After a long time of being stuck in neutral, the franchise is starting to look fresh again. Nintendo have added drifting mechanics, the ability to drive on walls and ceilings and all manner of other F-Zero related shenanigans. Which once again makes it a trend setter within the lagging karting genre. Oh wait… No it doesn’t. Because Sonic & Sega All Stars Racing was doing all that already and doing it really fucking well.

the Nights into Dreams track is nostalgic heaven!

Part two in the franchise, named Sonic & All Stars Racing Transformed, makes some major changes to the formula while building upon the superb core mechanics of the original. Adding craft which transform from cars to boats to planes within the same track was a great idea, mirroring classic karting games like Diddy Kong Racing. But just like the sterling original Sonic & Sega All Stars Racing, Transformed goes far beyond it’s influences (mainly Mario Kart, F-Zero and Outrun) with blistering speed, amazing drifting mechanics and pinpoint perfect track design.

this screenshot makes me want to go to a water-park SO bad!

As with the original, Transformed plays excellently to nostalgia. The game features tracks not only from the Sonic series but from (deep breath now) Nights into Dreams, Skies of Arcadia, Panzer Dragoon Saga, Golden Axe, Samba De Amigo, Shinobi, Outrun, Afterburner and more. These tracks are represented with graphical perfection and their classic musical themes in tow. The character suite is also impressive. You have the usual suspects, such as Sonic, Tails, Knuckles, Eggman… etc. But you also have such oddballs as Wreck it Ralph, Joe Musashi, Vryss from Skies of Arcadia, the Dwarf from Golden Axe and… um… Danica Patrick. That’s a pretty wild mix! But no Ryo Hazuki of Shenmue fame this time around. Boooooooo!

Transformed also has some basic improvements over the excellent original title; the much-missed ability to play GP mode in split screen has finally been added and the themes of the tracks are much less repetitive (as noted above). The only negative thing about this title is the way that you unlock extra characters. In the original you earned coins simply by playing, which you could then spend on unlocking anything you liked. That was a great addictive system. Transformed forces you to play through a world tour, which involves drifting challenges, survival races and other Subsidiary modes. If you want to unlock all the characters (and why wouldn’t you), you also have to play it through on multiple difficulty settings. This means that only the truly hardcore players will get the opportunity to race as the dwarf from Golden Axe. I don’t appreciate that type of exclusion! That said, these modes are fun and addictive in a ‘trophy-whore’ kind of way and are well worth putting some time into. But still, don’t fucking tease us with a multitude of characters and then lock all the interesting ones away! That’s total bullshit, especially as a lot of people who buy the game will only want to play it when their friends come round.

What working adult in his right mind would play a Karting game alone for hours on end in order to unlock fucking Shadow the fucking hedgehog so that his fucking mates can play as the fucking thing for five fucking minutes a fucking month!? WHY SEGA, WHY!!!!

Um… Sonic & All-Stars Racing Transformed is still far and away the best karting game available. So bring it on, Mario Kart 8!